Life with a Pointer

When I worked for one of the largest animal welfare organizations in Europe, the estate Aiderbichl, some years ago, I had one day a life changing meeting. At the Sonnenhof I got to know “Point”. Point, called also Pointi, was the first pointer Lady in my life which I consciously noticed. So far the race had been unnoticed by me.

Pointi was a completely intimidated pointer Lady at the age of 3 years, which came from Italy and must have had terrible experiences. She showed no confidence in people, trembled pitifully when only approached. At her side a further pointer – almost identical to her, Basti. At the time, an approx. 9-year-old pointer that originally came from Spain just could not find the right family for himself. Basti had taken Pointi under his care and shared a basket with her. The two were inseparable. Pointi, despite her panic, had a very strong character from the very beginning. She could be incredibly stubborn, but also incredibly loyal. What she did not want she did not want and still does not want until today. She managed not to eat for several days and left the food to the other dogs, or refrained from excretion for up to 24 hours. I decided to open a “shy group” and included Pointi. She seemed to like, being among “like-minded”. Until a few days later she attracted the interest of the males so strongly, that it seemed very funny for a supposedly neutered bitch. At the end, when one of the males due to his hormones bit Pointi while riding her back, I knew than that something must be wrong and took Pointi away not only from the group, but into my apartment located on the estate.

Henceforth Pointi spent the next three weeks on my pillow and refused to leave my apartment let alone my pillow. For a long time, I could fight my fatigue every night, but eventually I fell asleep and Pointi took advantage of precisely these moments to make a small trip through my apartment thus she  got detached. 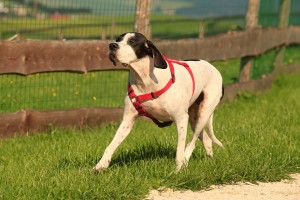 It was a very long and bumpy path to gain her trust. When I took her to the veterinary clinic to verify the castration, it was found that someone in Italy had bungled, as parts of the ovaries and the fallopian tube were left behind, therefore, she had to undergo surgery again. Till today nobody is able to explain the tattoo on her mammary ridge.

It was very important for me, to be present when Pointi wakes up from the anesthesia, and indeed, it was from that point in time that Pointi and I got linked by an invisible bond. After the anesthesia, she opened her eyes, saw me and waved happily her tail. She could hardly wait to finally enter the car and be allowed to go along with me…

Till today, Pointi and I are still inseparable. Since then my love for pointers has been unabated.

Half a year later another pointer came into my life: Zouzou.
When Michael Aufhauser brought the pointer-lady from Greece to Salzburg, she could not walk. Her spine was broken in two places and she was paraplegic. Thrown on a coast road out of a car and run over by the following vehicle, Zouzou saved herself with the last strength into the nearby ice-cold sea to better endure the pain.

In Greece, the attending veterinarian who also privately treated Zouzou, reached after a few months her personal and veterinary limits and looked for a place of mercy for Zouzou. She found it in estate Aiderbichl in Austria. At that time nobody believed in a recovery or even a healing and the possibility that Zouzou would someday walk, run and race like other pointers.

However, Zouzou was always a fighter. She has only her will to thank that she is still alive today. She owes it only to her fighting spirit that she could run again after several weeks of physical therapy with me (I have learned the basics from YouTube videos, because I had no idea of the subject); and that on all four legs. She climbed up the stairs slowly but steadily, stalked a bit around the world, but all that motivated her to make an even bigger effort and to succeed. I think I don’t have to mention that Zouzou was allowed to stay with Pointi and me, because the similarity between the two is baffling: Pointi is black and white and Zouzou orange white – both are English pointers. Today, Zouzou who is the fastest of the pack; and only if you look very closely, you can see a slight tripping on the hind legs and a small tremor of the nerves in the lumbar vertebra region. You should get to know Zouzou – we all can learn a lot from her! 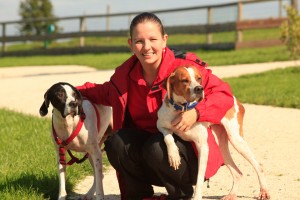 Now we were already three of us and it worked very well. We were and still are inseparable until today – the two were allowed to stay all day with me, accompany me on trips, in the office they lay together in their large dog basket under the desk and of course frolicked around a lot in the large fenced dog meadows of the estate Aiderbichl. Both learned a lot in the following years, benefited greatly from each other, and till today give each other mutual support. 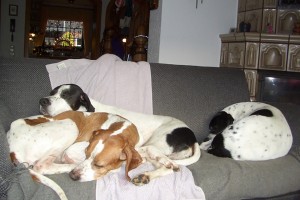 Basti was adopted by my parents almost at the same time when Zouzou arrived. He lived for two wonderful years with them and that way could see Pointi again.

If you live together with two pointers like I do, one day one gets interested in the origin and history of the breed, for other pointers in the world and one likes to also sometimes look “behind the facade of a pointer”. Because I could not have said it better:

The dogs are lively, expressive and never arrogant. They impress through their lively and warm manners…

Despite the strong body construction, pointers are very elegant dogs.

Read what I discovered in my research over the years, under the heading “The pointer“.

For this reason, I decided to establish the Club. And with all the pointers that I have met since then there is always a “heart pointer” that from time to time, touches me deeply in my heart. Such as our three-legged pointer mongrel bitch Zaki (approx. 1 ½ years old), which came to us from Cyprus or even the German Shorthaired (German pointer) bitch Cindy Lauper (9 months and in the middle of puberty), which also came from Cyprus. Together in the meantime they completed the pack. 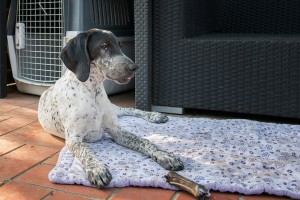 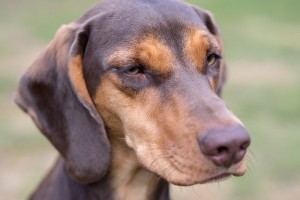 I can only recommend this breed from my personal experience!

Although these wonderful dogs had mostly very little human contact, they build trust pretty quickly and are infinitely happy about the slightest attention.

There’s hardly a breed of dog that is more sensitive and delicate, understanding and gentle as a pointer.

These gentle, loving dogs sneak with their irresistible charm in your heart. Forever…